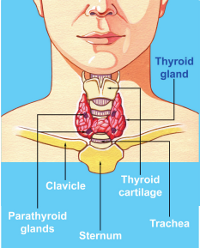 The thyroid gland is an endocrine gland in your neck. It makes two hormones that are secreted into the blood: thyroxine (T4) and triiodothyronine (T3). These hormones are necessary for all the cells in your body to work normally.
Thyroid disorders are very common and tend mainly to occur in women, although anybody - men, teenagers, children and babies, too - can be affected. About one in 20 people has some kind of thyroid disorder, which may be temporary or permanent.
The thyroid gland lies in the front of your neck in a position just below your Adam’s apple. It is made up of two lobes - the right lobe and the left lobe, each about the size of a plum cut in half - and these two lobes are joined by a small bridge of thyroid tissue called the isthmus. The two lobes lie on either side of your wind-pipe.

What does my thyroid gland do?

My advise
!...  Thyroid gland will release Two important hormones Thyroxine i.e T4  and  Triodothyronine i.e T3 which are very important for our body functions.
2....If these hormones are less or excess will called as thyroid problem
3... It check all nutrients entered in our neck with our food and send it to needed parts of the body
ex...Calcium to the bone structure, iron to blood ...............
4...  Due to our unhealthy life food it tries to do its job but when unwanted or unhealthy contents in our food spoils its function  it called as thyroid problem
5..   When thyroid gland is damaged due to unhealthy food  it will not produce T4 and T3 hormones as needed.   The result will be negative on our body like weak bones, infertility problem.......................
6.... Follow healthy food to protect your thyroid gland to avoid health problems.