Lever and other outside of the body 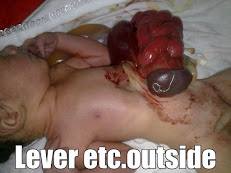 Scientific ReasonsScientifically it is known as Omphalocele, also known as exomphalos, is a birth defect of the abdominal (belly) wall. The infant’s intestines, liver, or other organs stick outside of the belly through the belly button. The organs are covered in a thin, nearly transparent sac that hardly ever is open or broken.As the baby develops during weeks six through ten of pregnancy, the intestines get longer and push out from the belly into the umbilical cord. By the eleventh week of pregnancy, the intestines normally go back into the belly. If this does not happen, an omphalocele occurs.
The Centers for Disease Control and Prevention (CDC) estimates that each year about 775 babies in the United States are born with an omphalocele.1 In other words, about 1 out of every 5,386 babies born in the United States each year is born with an omphalocele. Many babies born with an omphalocele also have other birth defects, such as heart defects, neural tube defects, and chromosomal abnormalities.2
Women can take steps before and during pregnancy to reduce the risk of having a baby born with birth defects. Such steps include taking a daily multivitamin with folic acid (400 micrograms), not smoking, and not drinking alcohol during pregnancy.
Causes and Risk Factors
Alcohol and tobacco: Women who consumed alcohol or were heavy smokers (more than 1 pack a day) were more likely to have a baby with omphalocele.3
Certain medications: Women who used selective serotonin-reuptake inhibitors (SSRIs) during pregnancy were more likely to have a baby with an omphalocele.4
Obesity: Women who were obese or overweight before pregnancy were more likely to have a baby with an omphalocele.5
As I explained U that HEALTHY THOUGHTS OR POSITIVE THINKING is necessary for the couple to give birth to HEALTHY AND BRILLIANT CHILD. I explained "The role of a woman is important to give birth to HEALTHY and BRILLIANT CHILD" . I explained that the woman wants to give birth to Healthy child should know the importance of 1. Air 2. Water 3. Healthy food 4. Rest 5. Excrement 6. Exercise and 7. Healthy Thoughts or Positive Thinking to avoid defective birth.

My advise
1...   I told U many times that your mind plays an important role to avoid defective births.
2...   Before conceiving you should develop positive thinking to have a child
3...   Most of the couple simply think to conceive but no one think to have a healthy child..  it is the major problem
4...   I advise every couple not to conceive until you develop positive thinking.
5.     Before conceiving you should have clear idea about your child