Your child during your second trimester

January 19, 2019
Your child during your second trimester 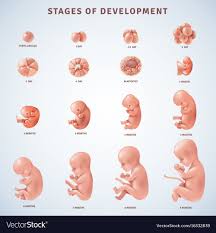 My memories
Your child during your second trimester
Posted in 2015


During the second trimester, steady contractions of baby's diaphragm and chest muscles occur (think of them as practice breathing movements). Baby's first sucking and swallowing impulses kick in around 16 weeks. By 21 weeks, your baby's natural reflexes will allow him to swallow several ounces of amniotic fluid every day. And all of that swallowing means baby's tasting, too – another sense that's now in full gear.
At around 18 weeks of pregnancy, you'll feel baby's first kick (but don't worry if it takes a few weeks longer — that's common, especially among first-time moms). Around the same time, your baby's nerves become covered with myelin, a protective insulation that speeds messages between nerve cells (myelin continues to grow until your baby's first birthday). And at 24 weeks, another big reflex occurs: Blinking.
At the tail-end of trimester two, your little one's brainstem (heart rate, breathing, blood pressure) is almost entirely mature, resting just above the spinal cord but below the cerebral cortex (the last area to mature). By now, the fetal nervous system is developed enough so your baby is startled by loud noises outside the womb — and may even turn his head toward the sound of your voice! Another exciting development: At 28 weeks, fetal brainwave activity features sleep cycles, including REM (the stage when dreaming occurs).

My advisse
1....  By 21st week starts swallowing the fluid around him..
2...   When swallows he will taste mother's food which is around the child in the form of amniotic fluid..
3...   Due to your food his body, health and mind develops accordingly.
4...   So follow healthy food so as to  your child grow healthy